Rwenzori Journalist Forum (RJF) in partnership with Bundibugyo Media Practitioners’ Forum has held the 2nd monthly press conference on 9th September 2014, at Vanilla Hotel located in Bundibugyo Town. The 1st press conference was held in Fort Portal and was organized by Tooro Media Practitioners (TOMPA) in partnership with RJF. The monthly press conference which is supported by ToroDev is aimed at improving service delivery through timely engagements between local citizens and both local and central government leaders.

The Press conference was attended by local citizens of women and youth representing the sub counties of Bundibugyo District, the district political and technical leaders, journalists from the two local FM radio stations based in Bundibugyo district (Voice of Bundibugyo and Bundibugyo Development Radio) and civil society members among others. 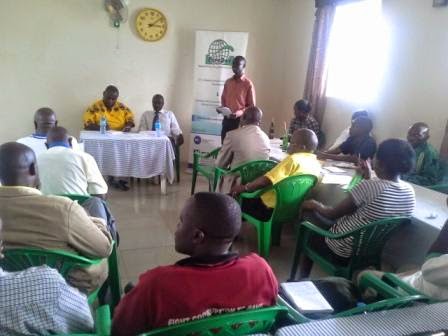 During the press conference, the Chair person LCV Hon. Joy Tibamanya appreciated the efforts of Bundibugyo leaders in diffusing the tribal conflict between the Bamba and Bakonzo ethinic groups by promoting a culture of peaceful co-existence, “I thank all leaders for helping in diffusing the tribal conflict, and appeal to all citizens to walk the talk of peace so that we create a better working environment for delivering services.”

Hon. Tibamanya added, “As leaders, we have worked hand in hand [with all district leaders] to see that better services are delivered. We have used our rural water grant to take water to places like Buhundu village, Kirumya, Nyangasa, and other places. We have also constructed bridges in Togwe, Bundi-Mulangya, Bundingoma, Buhura, among others”.

The Deputy CAO Mr. Nsubuga also gave accountability on the performance of the budget for the current financial year (2014/15). “This financial year [2014/15], we have UGX 23 billion as Bundibugyo District from the central government. We also have other programs that supplement on the district budget such as the Luwero-Rwenzori program and UNICEF, however, we are facing a big problem of high staff turnover because the district is a hard to reach area. The budget is still not enough to pay staff in schools, hospitals, and other sectors of the district”.

Other leaders who gave accountability were Mr. Kisembo Charles, the District Health Officer (DHO) of Bundibugyo who highlighted the performance of the health sector, “Bundibugyo District has twenty eight health facilities, one being a hospital, three health center IVs, eight health center IIIs, and fourteen health center IIs. The major health issues that we have are malaria, pneumonia, HIV/AIDS and diarrhea”.

During the press conference, local citizens were allowed to engage their leaders through asking them relevant service delivery questions which were responded to by the leaders, “I am requesting the CAO to finish construction of the structures at Ngobya”, Said Richard from Rwenzori Anti-corruption Coalition (RAC), “Does the DEO hold powers over the secondary leadership”, Said Steven from Bukonzo, “I want our leaders to explain why little funds are allocated to our roads, which end up being constructed badly” Said Steven, “Nyakairo Road was under the DLSP program but it hasn’t been constructed”, said Abraham from Nyakairo Sub County.

The discussions of the press conference were aired on various local FM radio stations across the Rwenzori Region and also shared online especially through ToroDev and partners supported social media platforms.

The monthly Press conferences is supported by NED, SIDA/CIPESA on a project aimed at using appropriate ICT tools to promote democratic engagements in the Rwenzori Region, Western Uganda.