ToroDev has been highly involved in mentoring and supporting the initiation and strengthening the newly formed advocacy forums to champion the demanding of improved service delivery and democratic engagements through the use of ICT4D tools in the Rwenzori Region districts. ‘

Better Youths Life Forum’ in Butiiti Sub County, Kyenjojo District is one of the advocacy forums that have been formed by the 120 rural monitors who were trained by ToroDev in online advocacy, monitoring service delivery using online social media tools like Ushahidi plat form for online documentation, visualization and mapping. 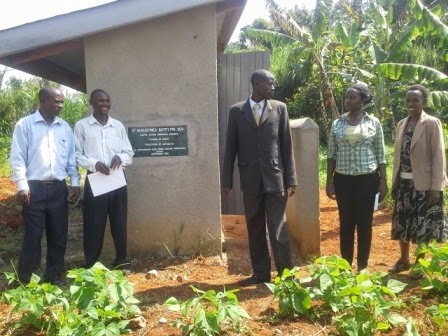 ToroDev M&E Team with rural monitors at the constructed latrine

Members of Better Youths Life Forum have used their skills to monitor and lobby for better services in the education sector. “We have taken responsibility of monitoring the poor state of Butiiti Demonstration School. The school has only fourteen teachers with seven class rooms. The school holds a number of six hundred and seventy five pupils, who are so many as compared to the school facilities. Government constructed three latrines at the school, but they all collapsed due to the shoddy work that was involved. We followed up the issue by using radio programs and also approaching the concerned local leaders until UWESA donated two pit latrines at the school”, said Mugume Bright, the secretary of the forum.

Rural monitors also raised the issue of the poor state of a staff latrine at Butiiti Health Center III to their leaders. “Staff at Butiiti Health Center III had no latrine. The existing one was filled up and in a poor sate. We approached the concerned leaders at the Sub County and District level, and as I talk, a newly constructed latrine has been handed over to the staff at the health center”, said Ahaisibwe Jane, the Chairperson of the forum.

The advocacy forums are supported by SIDA/CIPESA on a project aimed at using appropriate ICT tools to promote democratic engagement in the Rwenzori Region, Western Uganda.