Leaders  of Katooke people’ forum Mr. Muzoora  Godwin and Mr.  Tugume Josephand also the Leader of PRIFODE Mr.  Mukwano Ssenyojo of  Mugusu Sub county appeared  live on Better FM  for radio discussion  on Sunday, 15th February 2015 and discussed a topic  “Are Ugandans in the Rwenzori Region enjoying better services?  If no Why“

“Mwenge north is one of the county that has not benefited from the Leaders we voted to go and represent us at the parliament and district level, for example in Katooke town council we have tractors to collect garbage, but they are just packed and garbage is everywhere in the whole town council, secondly people of Kahanda, Bufunjo, Kiswange and other villages are crying of lack of clean water, Katooke Health Center 111 does not have enough drugs and most patients now are only given Paracetamol. We are suffering in terms of having unimproved services because leaders during campaigns confuse and lie to voters promising them to provide services but they don’t provide any as soon as they win the votes, voters are always forgotten.” Said Tugume Joseph From Katooke sub-county Kyenjojo district  during the Listeners forum talkshow live on Better FM.

Politicians know how to use sweet words during campaigns and on radio and make voters very excited which attracts voters to end up voting them. The truth is our leaders don’t have a heart to serve the voters and don’t have the capacity to lobby for better and improved services in Kyenjojo sub-county that is why we have many roads with potholes, we never got any first grade in Senior Four results in Katooke sub county, no clean and piped water etc”. Said Muzoora Godwin from Katooke sub-county Kyenjojo district. 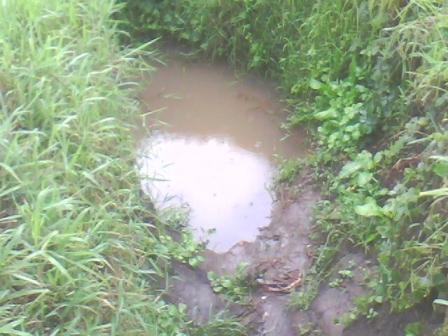 The type of Water people of Kahanda Kyenjojo collect for their domestic Use.

“We voted because we wanted our leaders to go in office and represent us, lobby for us and provide us with better services as much as they can, but somehow some local citizens who voted have never taken any step to go back and ask the leaders they voted into power about services they promised to do for them during the campaigns. Local citizens just complain from their homes and bars without approaching the leader and they go ahead and laugh at us whenever we try to approach leaders demanding them for better services.

This is one of the reasons as to why we still have poor services in most sectors and in most sub-counties of the Rwenzroi region”.Said Mukwano Ssenyojo, from Mugusu Sub-county.
“Local Citizens of the Rwenzori  Region are not enjoying the best services because they have been lied by politicians who speak sweet words and have convincing tongues, used during campaigns to deceive voters”. Said  Kamara a caller from  Bugaki, Kyenjojo District.
During the live radio discussion over 20 local citizens called in to give in their comments, issues, ideas on the topic of discussion and shared the nature of poor services they have in most sub-counties and districts of the Rwenzori Region.

The live radio discussions are supported by SIDA/CIPESA , ICT4Dem and NED  in Partnership with ToroDev.