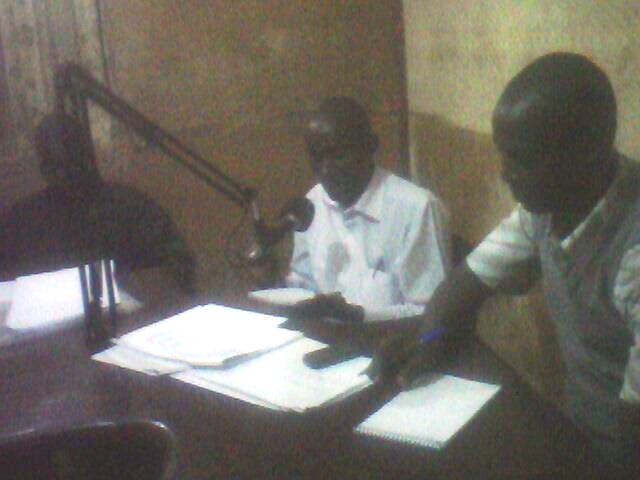 The panelists during the radio talkshow.

On 8th February 2015, Mr. Muntu K Willy district speaker from Ntoroko district and Mr Mwanguhya Kenneth a responsible citizen from HakibaleCommitted Citizen for Better service, Kabarole district were among the panelists who appeared on better FM to discuss the issue of politicians buying people’ votes during the campaigns to win elections.

“Politicians who bribe people with money during campaigns fall in this say “USING MONEY TO GET MORE MONEY”. They think that if they are elected they will in 5 years of being  in power will be able to harvest more money to pay back the money spent buying people’ votes such politicians don’t   provide any improved services to people we need to learn a lesson from what we have seen so far “. Said Muntu Willy from Ntoroko district.

“We are having poor services in health, education, roads and others sectors because voters vote according to who is rich and with much money and the potential, knowledgeable, talented and capable leaders who have no money are always with the least votes during the elections this is a big problem, in Uganda without money you can be a voted. Today Voters think that a politician with much money is a good leader to represent people at the district, in the parliament and other political seats forgetting that politicians who have money will always want to make more money for themselves, so when they are elected they mind about making more money for themselves but not to deliver service people.”Mwaguhya Kenneth of Hakibale Committed Citizen for Better service, Kabarole district.

“Local Non Government organizations, have a big role to play to sensitize local citizen on how to vote wisely, local radio stations should teach people who are not knowledgeable about who a good leader is, why people have to vote wisely?, how local citizens can avoid leaders who come with money to buy their votes?, we need to love our country and refuse to vote leaders who come with money to buy votes and when local citizens are sensitized we shall have better leadership in future and we shall have somehow improved services if we know what we want from the politicians we vote to represent us at any level ”. Said Kyaligoza a caller from Nyabuharwa, Kyenjojo District.

“Voters I kindly request you not to accept any money or basic needs from leaders who come to buy your vote during the election period, a capable leaders who is willing to serve his or her people and deliver better services cannot give out money to buy a vote and confuse the voter. A leader who buys a vote proves that he is just after making more money when he is elected, after the elections and he/she will just go to office to bring back the money he/she spent to buy the votes and he will never deliver any service to people that voted”. Said Peter a caller from Kasese district.

During the live radio discussion over 15 local citizens called in to give in their comments, issues, ideas on the topic of discussion and shared their experience they have gone through during the election campaign, many have witnessed politicians giving them some money, some items like sugar, soap, goats etc asking for a vote and due to poverty and ignorance the local citizens take the money and items and end up voting a wrong leader.
The Listeners Program on Better FM is a 2 hour weekly radio program that discusses issues of accountability every Saturday (08:00-10:00pm) that is sponsored by ToroDev.