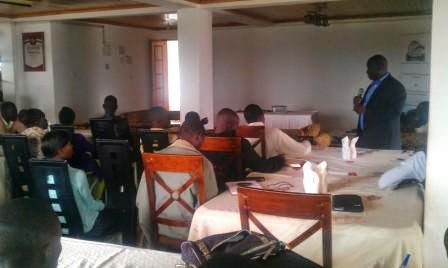 During the conference, Hon Alex appealed to members of RJF to act as a tool in marketing the Rwenzori Region. “Media is the strongest weapon that we have in our region. The media should therefore market our region and also take part in realizing peace in this region, through joining hands in solving the current cultural differences so that peace is stabilized in the Rwenzori Region”.
Hon Alex further gave accountability concerning Fort Portal Municipality. “Over 96% power average has been attained in Fort Portal Municipality, places like Bulyanyenje, Kyabukonkoni, Mukubo, among others have all received power. We have lobbied six billion from the central government to work on our roads, and this money is already on our bank account to also construct a bypass that will run through Kataraka-Kyegobe-Kasese Road”.
Hon Mugisa also highlighted the achievements from his office to the local people of South Division. “We introduced the bursary scheme that is meant to support vulnerable children who cannot manage the costs of higher institutions of learning. We pay half of their tuition until the course is accomplished. In the past three years, ten students have been supported, and some have already finished school”.
Hon Mugisa further gave accountability concerning the NAADS and Health sectors. “Under the production‘s office, twenty two homes received agricultural in puts, and eighteen heifers have so far been distributed since 2011. Under the health sector, two health center III’s were constructed in Mucwa and Kasusu, and a water tank was also constructed at Kasusu Health Center III”.
Meanwhile, Hon Alex appealed to members of RJF to always engage local leaders in giving accountability to the local citizens. “As RJF, it should be your mandate to always engage leaders in giving accountability to local citizens and also be a voice to the voiceless. You should also monitor services being delivered by your leaders. Leaders should also know that citizens elected us to serve them, therefore, we need to guide them on how to fight poverty and not keep them in poverty”.
The Press conferences are supported by NED, SIDA/CIPESA on a project aimed at using radio and social media to improve service delivery and accountability in the Rwenzori Region, Western Uganda.