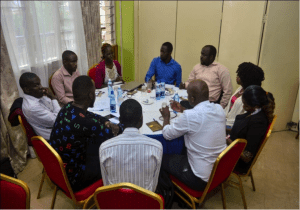 Youths have emerged at the forefront of online activism and citizen journalism in Kenya. During a December 2016 to March 2017 strike by doctors, young doctors shared their grievances online, ranging from lack of resources in government hospitals to inadequate staffing and poor compensation. One of the stories was that of Dr. Ouma Oluga, the secretary general of the Kenya Medical Practitioners, Pharmacists and Dentists Union, who shared how he had to perform a caesarean section using a torch on his mobile phone due to a power outage. He was only 27 at the time.
END_OF_DOCUMENT_TOKEN_TO_BE_REPLACED

The 2017 electioneering period has really and truly kicked in. Is the country ready to deal with the discourse that is emerging in the blogosphere and spilling into the real world?

With a large number of Kenyans, most of them young people, actively online, a large part of next year’s general election is likely to be fought online.

Unfortunately, the online agenda is likely to mirror the offline agenda, which is characterised by retrogressive, tried-and-tested tribal contours.

As a generation that has failed to live up to the Kenyan Project, as Dr Ndii so provocatively described it, the least we can do is to try and inspire future generations to succeed where we failed.

END_OF_DOCUMENT_TOKEN_TO_BE_REPLACED

BY VARYANNE SIKA,  IHUB RESEARCH
iHub Research, with the support of the Swedish International Development Cooperation Agency (SIDA) and the ICT4Democracy East Africa Network, conducted a study on the landscape of ICTs and Governance in Kenya, Uganda and Tanzania in 2014. This study was a qualitative exploration of the various ways in which ICT tools can/have successfully facilitated or hindered the two-way interaction between government and citizens towards effective public service delivery, tracking corruption, rights/access to information, as well as increasing transparency and accountability. The study was conducted in two towns (one urban and one peri-urban) in Kenya, Uganda and Tanzania.

END_OF_DOCUMENT_TOKEN_TO_BE_REPLACED

Late last year, I accompanied the Executive Director of Mzalendo when she went to deliver awards to some of the winners of Shujaaz Awards. The awards were part of an undertaking that recognized efforts by Members of Parliament whose activities in the House had the biggest positive impact on the Common Mwananchi. The winners were chosen via public voting that was conducted through Twitter. END_OF_DOCUMENT_TOKEN_TO_BE_REPLACED

For the past year, iHub Research has been conducting a study on the impact of ICTs on governance in Kenya, Uganda and Tanzania. Specifically, we set out to assess how ICTs are facilitating interaction between governments and citizens in the areas of civic participation (transparency and accountability), access to information, monitoring government service delivery (health, water) and tracking corruption.
We set out to interact with government institutions, civil society organizations and citizens alike. In Kenya, we conducted the study in Nairobi and Nakuru. In Uganda, we visited Kampala, Apac and Lira. In Tanzania, Dar es Salaam and Mwanza.

For Preliminary findings from all locations, click HERE.
Key findings of particular interest from the three countries are:

END_OF_DOCUMENT_TOKEN_TO_BE_REPLACED

The last week of August 2014 was an opportunity for the iHub Research team to explore the various ways in which ICT tools have/can successfully facilitate or hinder two way interaction between government and citizens towards effective public service delivery, curbing corruption, enhancing access to information and increasing transparency and accountability in Tanzania. The team visited Mwanza and Dar es Salaam to identify some of the innovative ICT initiatives that have facilitated the interaction between citizens and government as well as the (de)motivations for utilizing ICT tools among the various stakeholders (citizens, governments, civil society). While in Mwanza region we visited Magu district and Ilemela district.

READ ON THE PRELIMINARY FINDINGS IN DAR-ES-SALAAM HERE.

END_OF_DOCUMENT_TOKEN_TO_BE_REPLACED

The ICT and Governance in East Africa study explores the various ways in which ICT tools can/have successfully facilitated or hindered two way interaction between government and citizens towards effective public service delivery, curbing corruption, rights/access to information, as well as increasing transparency and accountability. Further we are looking into the innovative ICT initiatives that have facilitated the interaction between citizen and government as well as the (de)motivations for utilizing ICT tools among the various stakeholders (citizens, governments, civil society).

READ MORE ON THE PROJECT HERE.

END_OF_DOCUMENT_TOKEN_TO_BE_REPLACED

Our study on ICT and Governance in East Africa which is made possible by the generous support of SIDA and SPIDER, explores the ways in which ICT tools can/have successfully facilitated or hindered two way interaction between government and citizens towards reducing the cost of delivering public services, curbing corruption and increasing transparency and accountability. We are also looking into the innovative ICT initiatives that have facilitated the interaction between citizens and governments, as well as the (de)motivations for utilizing ICT tools among the various stakeholders (citizens, governments, civil society and the general public).

AN INTRODUCTION TO THE STUDY CAN BE FOUND HERE.

END_OF_DOCUMENT_TOKEN_TO_BE_REPLACED

There might be unanimity in the excitement about ICTs in Africa but there remains little empirical evidence on the ways of actual use of ICT and in particular, for our study, in governance. Governance, as we approach it in this study, has a political and social component, and is responsive to the present and future needs of society. Information and Communication Technologies are anticipated to improve governance. One of the key things we want to investigate is HOW they can, and are doing so, for where they have been adopted in East Africa.

iHub Research, as part of the ICT4Democracy East Africa network, seeks to study the innovative initiatives leveraging ICT for and in governance in Kenya, Uganda and Tanzania. The ICT and Governance study in East Africa seeks to identify, describe and analyse conditions under which ICT tools can or have successfully facilitated or hindered two way interaction between government and citizens.

END_OF_DOCUMENT_TOKEN_TO_BE_REPLACED

Background
Transparency International Uganda is a member organization to ICT for Democracy in East Africa network. The ICT4Democracy in East Africa Network is premised on the recognition that Information and Communication Technology (ICT) enhances communication and the right to freedom of expression, as well as the right to seek, receive and impart information. In this respect, ICT has the potential to increase citizens’ participation in decision-making processes, thus strengthening democratization.